This is volunteer’s week…

…and to celebrate, we decided to release the Friends Not Foes Newsletter for the year 2020. Enjoy ! 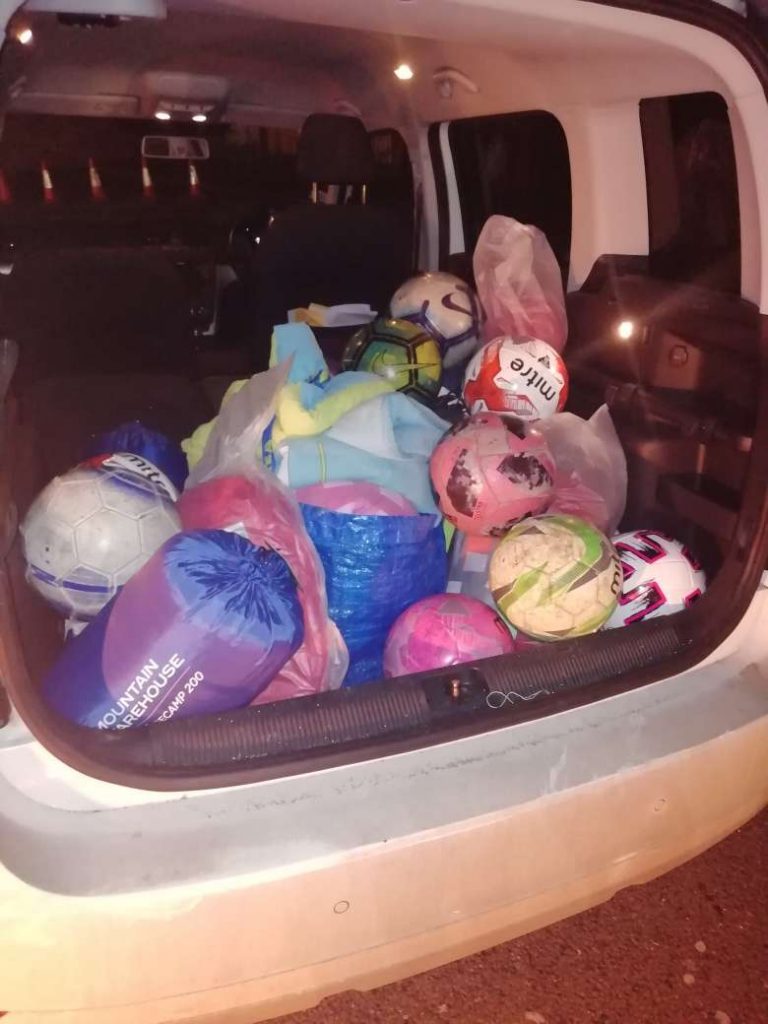 At the beginning of the year, the Charity Care4Calais sent a distress call to its volunteers, following the closing down of a gym, where more than 200 hundred refugees had to sleep in. They were asking for sleeping bags to support the unthinkable amount of people who had to sleep rough in the streets following this incident.

We therefore decided to set up a collection point at the Colchester Sixth Form, where the students could drop of any sleeping bags that they were not using. Additionally, we asked each tutor group at the college to provide one sleeping bag, or the equivalent amount of money (around 15 pounds).

Many groups played along, and we ended up with the impressive number of 30 sleeping bag, ready to send to Care4Calais. Philip, who is the current head of Refugee Action-Colchester, offered to carry the sleeping bags to France. He also suggested that we should collect some footballs for the children in Calais.

We were truly amazed by the generosity of students and teachers alike. Thank you especially to the Tutorgroup 114 who collected 6 sleeping bags ! We are strongly hoping that the sleeping bags and footballs brought a little comfort to the people living without any shelters or protection.

Every year, at the Colchester Sixth Form, Tutorgroups are asked to create an Hamper, containing food and toys, for the families who struggle financially, especially at times like Christmas.

Friends Not Foes joined this initiative, and decided to form an Hamper for 6 different refugee families in need around Colchester. With the help of a few TutorGroups, we gathered some money, which we spent on halal food at the ‘Food Ink’ store. 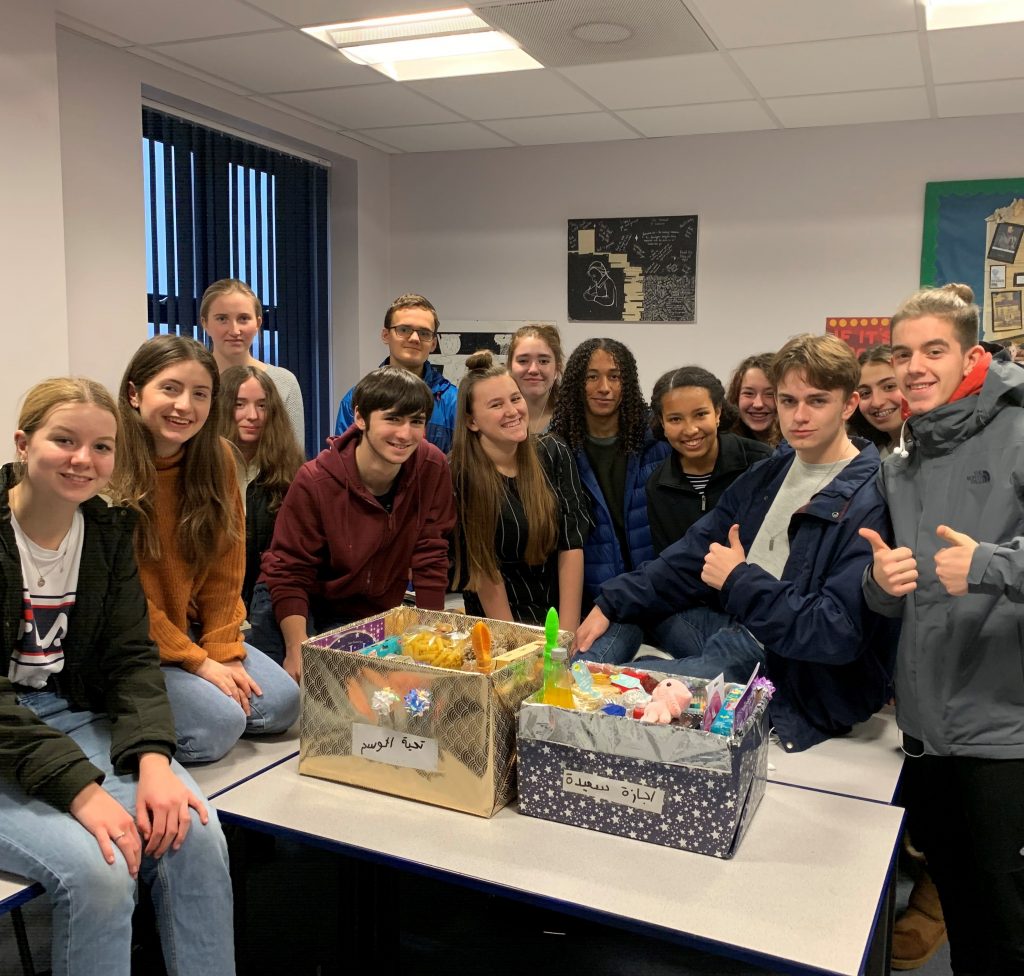 The owner was incredibly generous, and helped us by rounding down the price of the products. Thanks to him, we had some money left, which we spent on more toys for the children to enjoy. As a group, we shared the resources into the different hampers, until they were ready to be delivered.

It was a fantastic feeling to see the smile on the families’ faces as we handed them the fully decorated box. One of the children was so excited that he started to unpack the hamper in front of us !

This project was extremely important to us. Christmas being a time of sharing, we wanted to make sure that as many people as possible would be able to celebrate it properly. 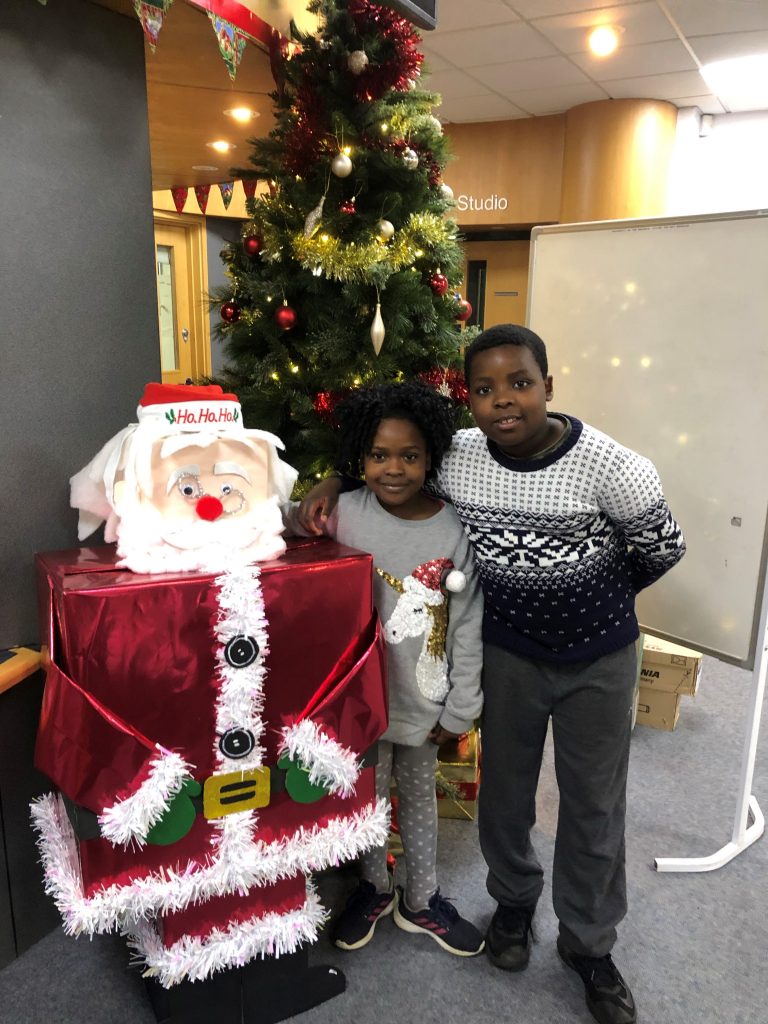 On the 20th December, Friends Not Foes invited our friends from homework club and some of the younger children to the Sixth Form College for a Christmas film screening! After some deliberation, we settled on How the Grinch Stole Christmas as our film of choice
We arrived early to decorate the lecture theatre with fairy lights and tinsel, and Alison brought up the big Christmas tree from the Concourse! Once the room was looking suitably festive, we set up tables of halal sweets and snacks, and bags for pick ‘n’ mix. The film went down well with everyone laughing a lot and enjoying themselves. Some of the younger children seemed to be particularly mesmerised by the colours and the funny characters.

The kids were gripped during the tenser moments of the film, and really enjoyed the songs.
While the kids watched the film, we spoke to parents, and a Friends Not Foes member helped to run errands and visit the shops for one of the women.
After the film had finished, the kids were very keen to help with the tidying up, cleaning up food crumbs, putting away chairs, and one especially helpful boy even offered to go around the room with a vacuum!
As a final present, we provided the kids with handmade recycled Christmas decorations made by Emily and the Arts Committee, of which there were plenty and enough for more than one each.
We bundled the excited children, Christmas decorations in hand, back to reception for home time.
It was a lovely day for all involved, and a nice opportunity to celebrate the break from school together, even if Christmas was not necessarily celebrated by everybody present!

During the Half-Term holidays, Kelly, Floran and I went along with Liz from Refugee Action to the Highwood Country Park, for a day of fun with ‘Greenleaf Forest School’. Before the children’s arrival, we helped Jim to set up camp. We were allocated to the putting up of the tree swing. We all attempted to wrap the rope around the tree, before Jim came to the rescue, and taught us how to tie a trusty knot.

When children arrived, we encouraged them to look for kindling to begin the campfire. We then all sat in a circle around the fire. Jim told us the rules of the camp, and everyone introduced themselves, picking an animal to match the first letter of our first name to create our ‘forest name’. For example, I was ‘Amélie the ant’. 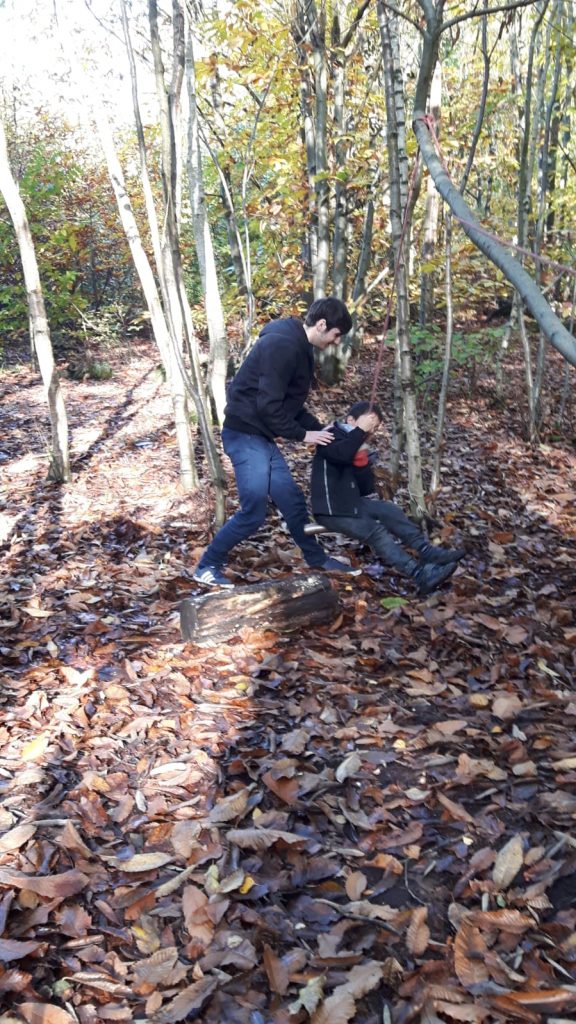 Afterwards, we were free to roam the forest, within reason obviously. The den making activity attracted the most attention from the children. This activity was really significant as it encouraged the children to work together to achieve the construction of practical yet beautiful hut. It was important for them to recognise how others may have different ideas, but it is the collaboration and the compromising that leads to success.

Following an hour of hard work, we were pleased to discover that Jim, helped by the parents of the kids, had been working towards cooking us all some lunch, which consisted of potato’s. Some of the families had also brought various home-made delights, such as the ‘veggie samosa’ which was amazing.

After lunch there was quite a lot of running around, various games of chase and the completion of the den. Then everyone wandered back into camp. We used our wood carving twigs as utensils and all huddled by the fire waiting for some marshmallows to be toasted. At this moment I remembered I had brought biscuits, so I handed them around to everyone and this worked a treat! We also told jokes and heard about the birth of Ola and Femi’s little sister, who came into the world only 4 days ago. We sent our gratitude to their mother as we began to pack up and carry the heavy bags back up to the car park.

On the 28th of February, we held a “Quiz Night” in order to raise funds for Refugee Action-Colchester. As time passes, this incredible organisation keeps growing, and thus require more money to provide for their numerous clients. 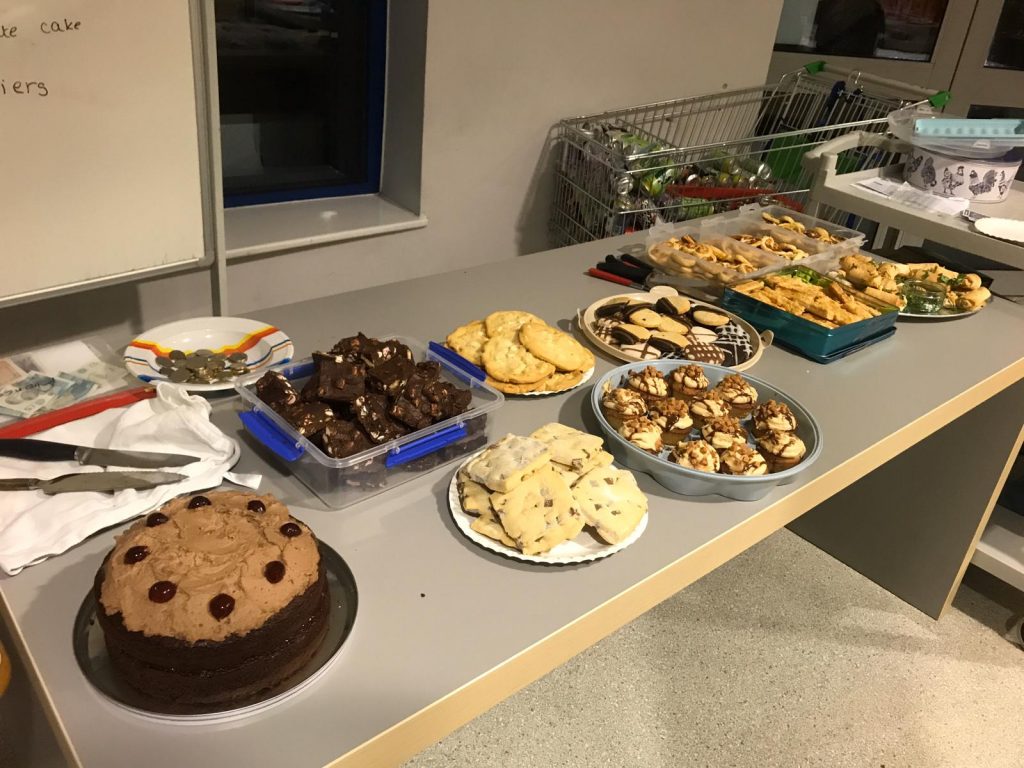 For the event, many members of Friends Not Foes cooked some delicious cakes that we sold throughout the evening. By 7 pm, we had around 60 people, each in teams of 6, who came to play the quiz. After everyone had a chance to buy some food and drinks, Elizabeth Curry said a few words about Refugee Action-Colchester and explained that the money raised would be spent on helping the most vulnerable, who are finding themselves without jobs and homes.

After a moving speech, it was time for the quiz to begin ! The teams went back to their seats, and the first round started. Everyone seemed to have an excellent time. Despite the competitive nature of the quiz, the night went off with a friendly atmosphere, probably because everybody knew that they were helping a good cause.

At the end, the quiz was won by the ‘English Support Team’ who collected their prize: 4 bottles of wine ! Well done to them !

This evening was also brightened by the announcement that Amélie Wakelin, one of the key members of the group, had won a Jack Petchey Award for the time and effort she has spent to help the Refugee Community. Congratulations Amélie from the rest of the group !

We were really impressed by the stunning number of people who joined us for this special night. Their contribution has allowed us to raise almost 500 pounds for Refugee Action-Colchester, and will certainly make a substantial difference in the lives of others. 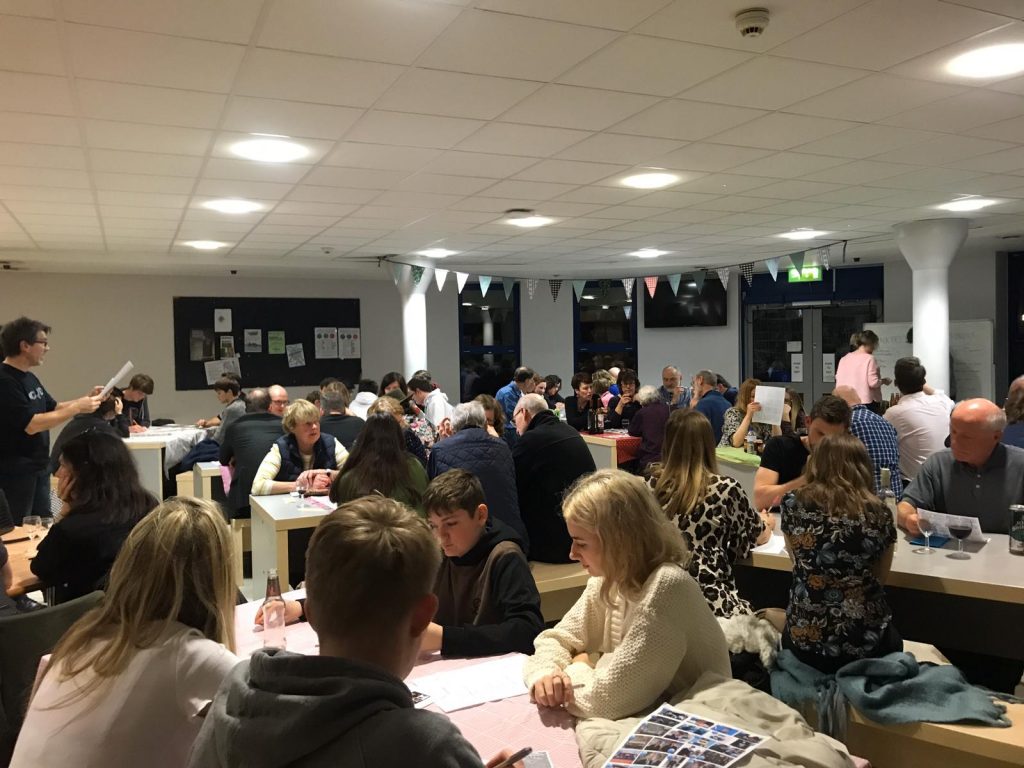